Aberlour is an an old distillery in the heart of Speyside, close to Macallan, Benrinnes, and Dewar & Sons distilleries, to name just a few. We stopped by unannounced late November last year and were pleasantly surprised that they were happy to accommodate us for a distillery tour. Because we were the only ones visiting at the time, the tour ended up being private.

Founded in 1879, the Aberlour distillery is situated on the Lour and Spey rivers in the namesake small town of Arbelour (population around 1000). It draws its water from a nearby natural spring, which runs along the distillery toward the cottage from where the tour starts. It was a brisk and chilly walk along the water until we reached the buildings where the magic happens.

The main entrance of Aberlour first opens into a lounge with lines of their famously squat bottles stacked. The first part of the tour is primarily historical, starting out with a rooms with displays on the history of the village and the distillery. One major feature was the headstone of the St. Drosdan’s well (the original water source for the distillery), which was used to baptize the Pictish tribes to Christianity. James Fleming then started the distillery in 1879. Fleming was a community patron of sorts, donating money to build the local Penny Bridge which is still in use today, the Town Hall, and the Cottage Hospital.

Aberlour has the same crazy archaic policy of not taking photographs in the distillery that you see in many other places in Scotland. This would make sense only if people commonly strapped 1920s flashbulbs onto their smartphones, thus threatening explosions. The distillery is highly automated and was running with quite a small crew, I think around half a dozen when we visited.

After touring the stillhouse and distillery we tasted Aberlour’s core range, their 12, 16, 18 and A’Bundah (pronounced “ah-boo-nah”) whiskies. We learned two interesting things about Aberlour on our trip. First, I didn’t realize that France was the world’s largest market for single malt whisky by volume, and that Aberlour was the best selling single malt in France. Second, I didn’t realize that Aberlour aged their whisky in bourbon and sherry barrels and then married them together; I’d thought that they finished in sherry instead of marrying (but given the existence of A’Bundah, I understand). 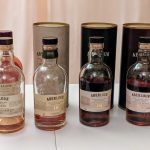 Review #39: Aberlour 12
Last week we went to a lecture and vertical tasting of Aberlour led by Brand Ambassador Callum O'Donnell. After climbing 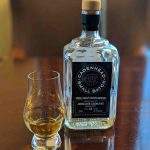 Review #26: Aberlour 24 Cadenhead
It's weird, but effervescent is an apt description for this one. Must try for lovers of Abelour.

Getting Lost in the Woods cocktail This was recomm

It's a boy! Found out last week that we are having

We are moving soon out of San Francisco to Oakland

Times are tough. And the distressing thing is that you can’t even visit a bar to drown your sorrows. We’re in the middle of a long “shelter in place” order that started mid March and is expected to continue at …